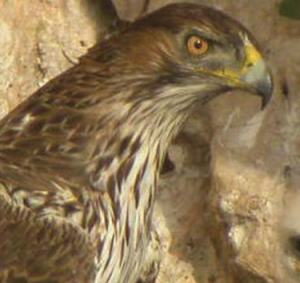 The Bonelli’s Eagle (Hieraaetus fasciatus) is one of the largest eagles in Greece, just slightly smaller than the almighty Golden eagle. It is a typical Mediterranean bird, although it can be found also in India and southern China. In spite of its large range, during the 20th century the species suffered a drastic decline due mainly to over use of pesticides, habitat degradation or loss, collision with power lines and windfarms and direct persecution. Greece is no exception to this trend with a population estimated around 100-140 pairs. For this reason, Andros, home to three pairs of this majestic bird, can consider itself a lucky island. With its numerous rocky cliffs, Andros provides plenty of nesting sites for the species, while its open lands are the perfect hunting grounds for the species – mainly, small to medium-sized birds, but also small mammals and reptiles. Each pair will raise 1-2 chicks that will then travel up to 200 km to find new homes, probably in other islands of the Aegean. In fact, the wide distribution of the species along the Aegean islands can be considered a peculiarity, because in the rest of Europe, it can be rarely found breeding on islands or islets. 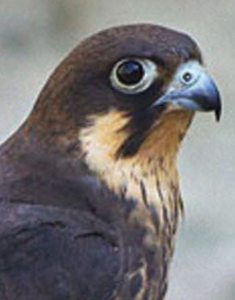 The Eleonora’s Falcon (Falco eleonorae), breeds mainly in the Mediterranean, with only a few more colonies in the coast of Morocco and the Canary islands. Practically 85% of the global population nests each year on the islands and islets of the Aegean. Greece is therefore the most significant country for the conservation and survival of the species. Here, the species can find uncountable islets to breed and an unlimited flow of migratory birds to feed their chicks with. The large population in Andros reflects the important passage of migrating passerines.

In order to fully exploit this enormous source of food, the Eleonora’s Falcon nests at the beginning of the autumn migration, much later than any other migratory bird. Thus, eggs are laid at the end of July-beginning of August, hatching takes place around the 20th of August, and chicks are able to fly by the end of September. It is in fact the only bird species that breeds in autumn. After this, the species migrates all the way to Madagascar and other islands in the Indian Ocean and Eastern Africa to spend the winter. It returns to our country at the end of April, when it can be found all over Greece, even in the high mountains of Pindos, until breeding time arrives. During this period, as well as in winter, the species feeds on insects; cicadas, grasshoppers, butterflies and flying ants, which are in abundance, and thus they can easily find food. 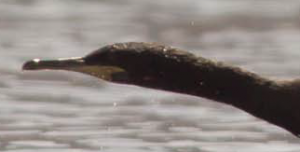 The Mediterranean Shag (Phalacrocorax aristotelis desmarestii) is not a classic seabird. The most typical image of this bird is either a black figure sitting on the coastline’s rocks or a bird swimming halfsunk in the water.

It prefers rocky coastlines and rarely wanders far from there. Its main food source is benthic fish, diving up to 60 m in depth to catch them, with the help of its strong legs. After eating, it usually sits on coastal rocks with its wings half-open for them to dry. It doesn’t migrate and it breeds very early in the season (some of them as early as December) on isolated rocky shores and islets. It usually lays 2-3 eggs that will hatch a month later. It is common in practically all Greek islands, with up to 1000-1200 pairs, but the largest colonies can be found in central Aegean and the Sporades. It breeds all along the Andros coastline, swimming even in ports and beaches.

Due to marine pollution and overfishing its food is now growing scarce. Unlike other seabirds, it cannot follow fishing boats, thus not being able to utilize the fish discards. In addition, being mainly a swimmer makes it very vulnerable to oil spills. Its nests are quite accessible, but luckily, unwanted visitors to islets are rare in the period it breeds. The Mediterranean Shag is classified as “Nearly Threatened” in the Red Data Book of Endangered Animals of Greece. 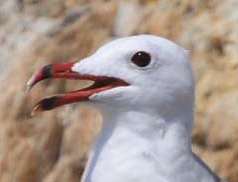 The Audouin’s Gull (Larus audouinii) is a gull species endemic to the Mediterranean. Its deep red beak and dark grey legs make it unmistakable. Over 90% of the global population breeds in the Western Mediterranean, and the largest colony is located in the Ebro Delta (Spain).

Population in Greece is estimated around 350-500 pairs, breeding exclusively on uninhabited islets of the Aegean, far from human presence. The colonies are spread along islets in the Dodecanese, Eastern Cyclades, Limnos, Kythira, Lesvos and North Sporades. Towards the end of April, it will lay 2-3 eggs, brownish with black spots. They will hatch three weeks later, and the chicks will be able to fly by mid June.

Unlike other gulls, it avoids going inland and most of the time it can be found close to the shore. Audouin’s Gulls feed near the coast, mainly on small fish close to the sea surface which they skillfully catch by flying slowly just above the water. It can also feed on discards from fishing boats. The Audouin’s Gull, a symbol of the Greek islands, is the most threatened seabird in our country. Intense fishing close to the coast has severely depleted the fish stocks on which it feeds. Its nests are easily accessible to both people and animals. To make matters worse, it breeds at the beginning of the touristic period, in early summer.