Andros wildlife is revealed in Chora Wildfires in Andros

The review conference for Project Life, which is realized by the Municipality of Andros with the contribution of the LIFE financial instrument of the European Union and co-funded by the Green Fund, took place on Monday, the 26th of September, with the participation of ten scientists -speakers.

The conference, titled “Andros’ environmental protection and sustainable growth”, was held in a central Athens hotel and it was greeted by the Mayor of Andros, Mr. Theodosis Sousoudis and the WWF representative and Life Cyclades coordinator, Mr. Spyros Kotomatas. Responsible for coordinating the conference was Mrs. Eleni Politou, who is also the municipal councilor in charge of the project.

The participating scientists talked about subjects that caught the attention of all attendees. More specifically:

– Mr. Panagiotis Pafilis, assistant professor of Animal Diversity at the Kapodistrian University, presented a series of rare animal and reptile species, existing only in the Aegean. He, also, talked about the role the islands’ environment plays for the survival of these species.

– Project Life Andros scientific coordinator, Mr. Anastasios Dimalexis talked about the cultural and ecological value of terraces (“aimasies”) and presented the details of the proposal he made to the EU for funding the University of the Aegean, the Municipality of Andros and other organizations in order to re-cultivate 1000 acres of terraces on Andros. The objective of this program is to limit the consequences of climatic changes and to provide an important boost to primary production, since all the products from the re-cultivated terraces will be marketed.

– Dr. Stamatis Stamatiadis, Director of the Soil Ecology Laboratory for the Museum of Natural History, talked about the latest developments in the field of waste management and treatment of sludge. He, also, presented methods of controlling both the temperature and humidity of the soil for maximum benefits in organic agriculture.

– Project Life’s coordinator, Mr. Isidoros Nikolaou, reported on the project’s important benefits for the environment, through protecting wetlands, re-opening of three dovecots and re-cultivating 100 acres of abandoned land. He, also, stressed the fact that the project, which will be terminated in a few months, after been given an extension, secured for the Municipality a significant strengthening of its infrastructure, as far as equipment is concerned.

– Important for the review of Life project were the interventions of Mrs. Victoria Saravia, member of the Ornithological Society and Mr. Yacob Fritz, a physicist from NCC. Mrs. Saravia presented statistical data about the positive outcomes of project Life on four protected bird species, since their populations increased, and Mr. Fritz presented integrated actions that can be used for preserving biodiversity on the islands – and especially on Andros.

– Mrs. Haris Nikokavouras and Giorgos Protopappas from the Ministry of Environment and the Green Fund presented the “tools” that exist and are used through the actions that have as objective the protection of the environment, while the former General Director of GNTO (Greek National Tourism Organization) Mrs. Maria Maraka-Romanou talked about the interdependence between the environment and tourism and stressed the need to redefine the tourist identity of Greece.

Finally, important was the presence of journalist Mrs. Maya Tsokli, who is the co-owner of the microbrewery of Tinos, which produces “Nisos” beer. Mrs. Tsokli talked about the problems presented to anyone who wishes to invest in a Cyclades island and the positive results that had the establishment of the microbrewery for the economy of Tinos, since many young people followed along by establishing a unit for processing meat, dairy processing units and many other businesses. Mrs. Tsokli wished for the re-cultivation of terraces to continue, since part of their products will be used by the microbrewery of Tinos.

The conference, which had been organized by the project’s communication manager Mr. Giannis Mindrinos, was attended by many owners of large tourist units, who intervened by commenting on subjects such as the protection of the environment by uncontrolled grazing, fires etc., as well as local societies’ and scientific organizations’ members. 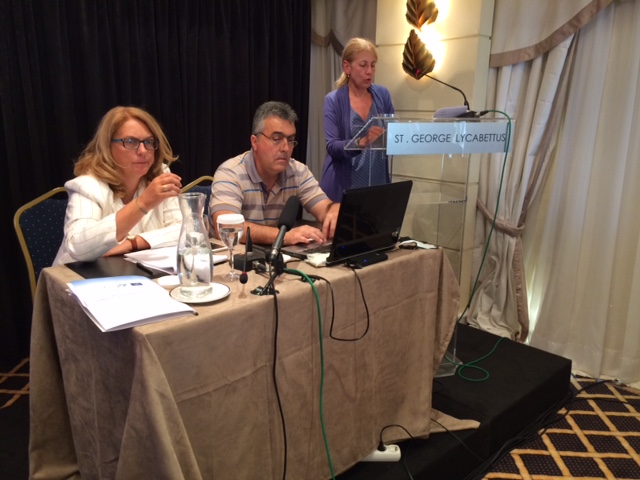 Mrs. Eleni Politou, municipal councilor, responsible for Life Andros and Mr. Isidoros Nikolaou, head of the project. Speaking about the interdependence between tourism and the environment is the former manager of GNTO, Mrs. Maraka-Romanou. 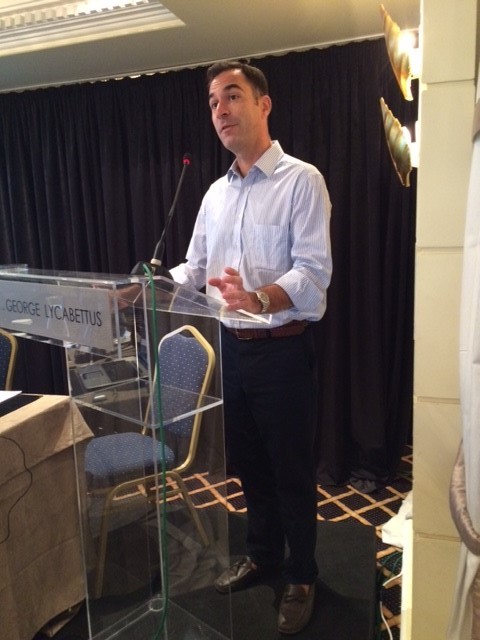 Assistant professor of NKUA, Mr. Panagiotis Pafilis talks about rare bird and reptile species that exist only in the Aegean. 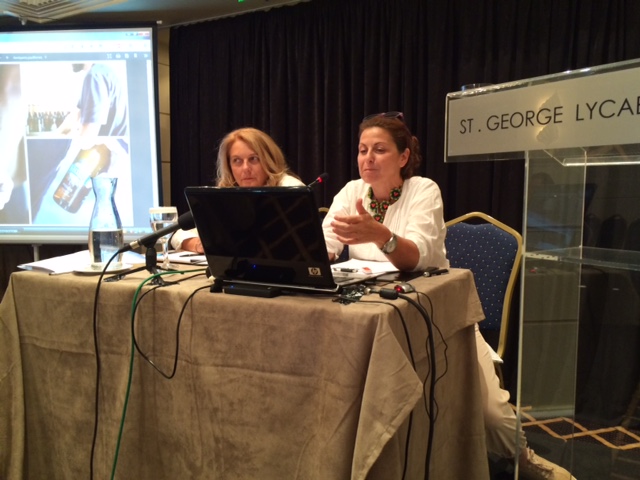 Journalist Maya Tsokli, co-owner of “Nisos” beer, analyses the problems of “doing business” on an island. 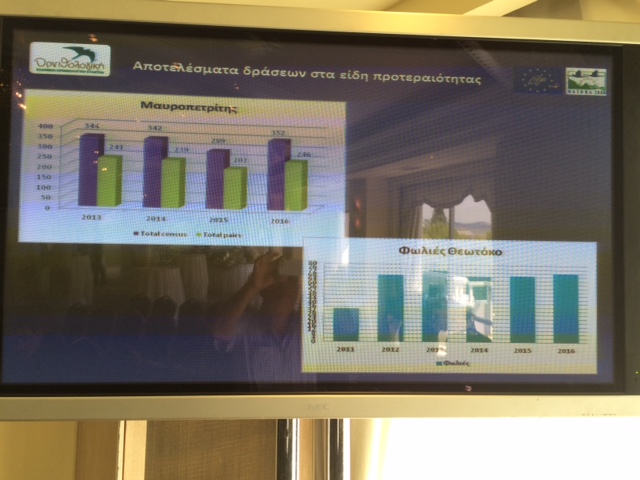 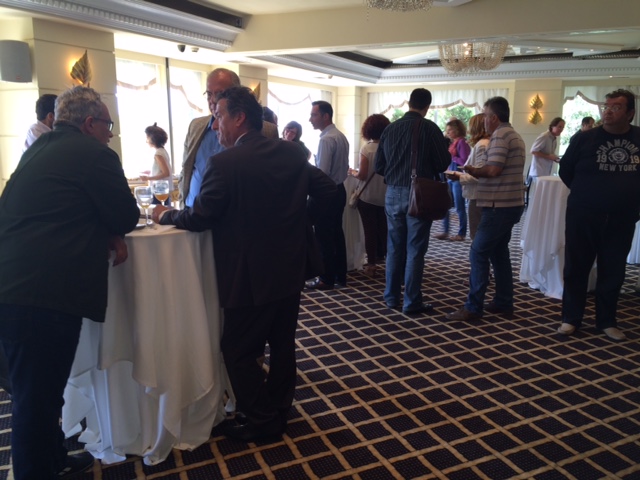 Coffee and snack break. On the foreground, Mr. Theodosis Sousoudis, the Mayor of Andros. 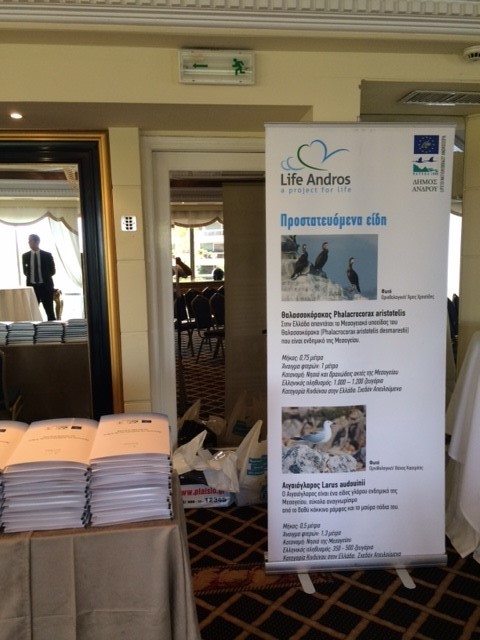