On Wednesday, the 24th of February, at 6.00 p.m., Life Andros, which is realized with the contribution of the LIFE financial instrument of the European Union, was presented to the members of Andros Society in Piraeus in the Society’s premises on 162 Kountouriotou str.

The presentation was part of the project’s promotional program, which aims to acquaint Andros organizations and residents with Life and increase awareness and volunteer participation in actions for the protection of the island’s environment.

Present in the event was the Mayor of Andros, Mr. Theodosis Sousoudis, who presented the goals of the project and its realization progress. He also talked about the new Life proposal that the Municipality has committed in partnership with the Agricultural University of Athens and NCC.

Mr. Isidoros Nikolaou, the head of Life Andros, presented the actions of the project, discussing in details everything that has been already realized and the actions that are scheduled to be concluded until the end of the project (31st of August 2016).

Following the presentation, the Society’s members watched the thirty-minute long documentary “Protecting the nature in Andros”. The documentary was sponsored by the Life project and promotes the natural beauty of the island. Most importantly, the documentary features Mr. Nigel Marven, a Discovery Channel reporter, who visited the island to document the life and reproduction cycles of Eleonora’s falcons.

After the video, the members of the Society had the opportunity to ask questions and discuss about the project both with Andros’ Mayor, Mr. Theodosis Sousoudis and the head of the project, Mr. Isidoros Nikolaou. Responsible for organizing the event and coordinating the discussions was the communication manager of the project, Mr. Giannis Mindrinos.

The Municipality of Andros and Life project wish to thank the President of Andros Society in Piraeus, Mrs. Vasiliki Linou, and all the members of the board for their hospitality. 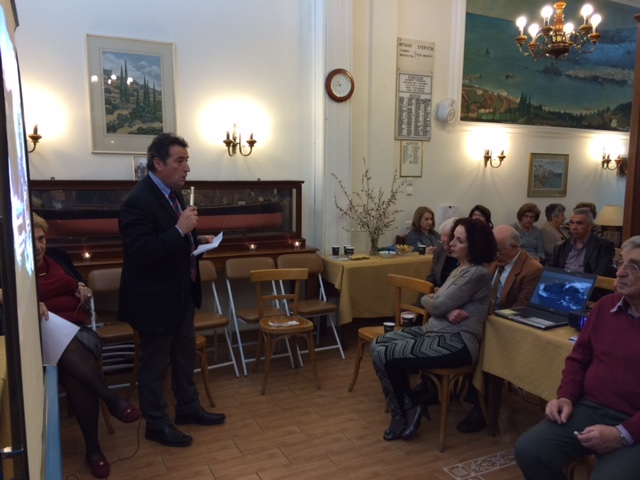