Caring for the agricultural garden in Agadakis estate

On Tuesday, the 8th of March, the project team worked in the Life Andros agricultural garden in the Agadakis Tower estate in Apatouria. The works, specifically, included separating different crops, weeding, hoeing and watering. The plants develop in a satisfying pace and it was observed that we were able to effectively combat the aphids.

We remind you that in a part of the Agadakis estate, which belongs to Kairios Library and has been granted to Life project, for the culture of traditional crops of Andros, we have planted seeds of rare and endangered crop varieties. Last month, during our scheduled visits to LIFE’s garden, it was observed that the broad bean plants had been attacked by aphids. These are very common insects that destroy the leaves of plants and come by many different names like aphids, plant lice, greenflies, blackflies, or whiteflies.

The Life project team dealt with the problem in a natural way, using a mixture of green soap dissolved in water with a small amount of denatured blue alcohol. The mixture was sprayed on the plants and so, without the use of chemical products and in a simple and fast way, we were able to deal with the insect problem. In our garden in Agadakis tower, all stages of cultivation are being done in the most natural way possible, while the ground has been enriched with compost from the municipal compost maker.

The gathering of Andros’ local crop seeds was realized by the Agricultural University of Athens, as part of the actions of Life project, which is realized by the Municipality of Andros with the contribution of the LIFE financial instrument of the European Union. 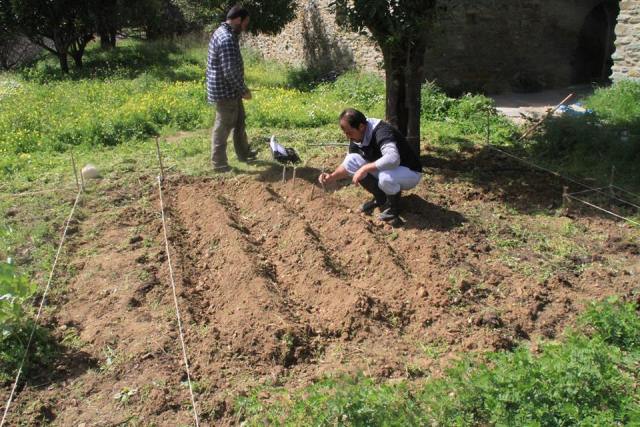